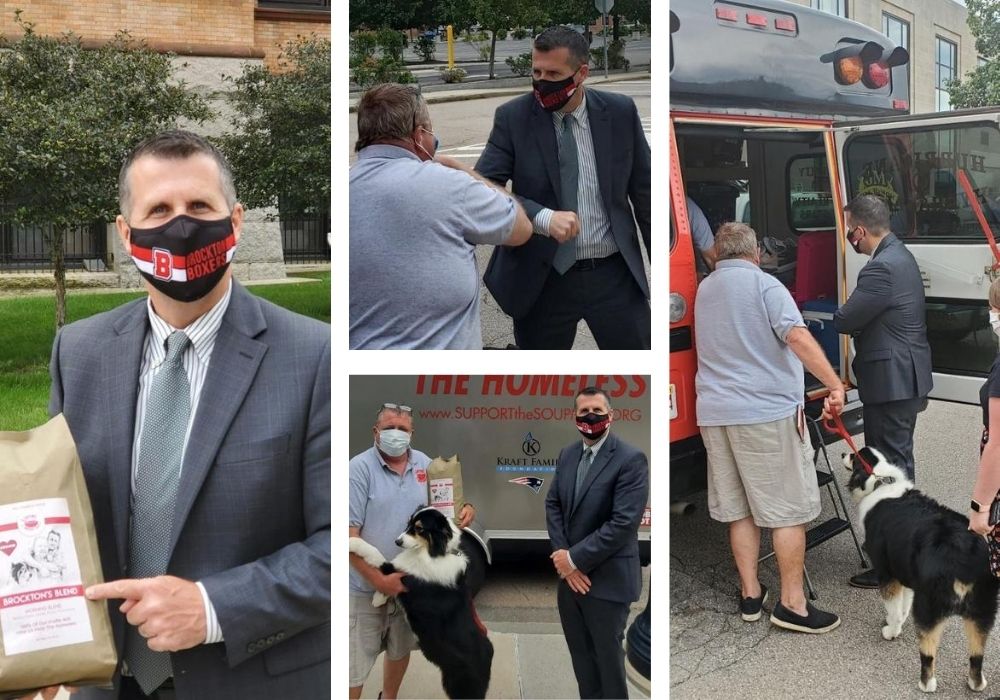 Posted at 18:47h in Updates by soupmanadmin 0 Comments

Staff writer Corlyn Voorhees can be reached at cvoorhees@enterprisenews.com. You can follow her on Twitter at @corlyn_ENT.

With his recent expansion into a coffee line, Peter Kelleher, known as the “Soupman,” recently presented a bag of his Brockton Blend coffee to Brockton Mayor Robert Sullivan. Outside of coffee, his mission to help the homeless may soon continue in the form of a food pantry in the city.

BROCKTON — These days, Peter Kelleher, known as the Soupman, has been keeping busy around the Brockton area.

His mission to help the homeless was sparked by the death of his son, Travis, at age 33 in Bangor, Maine, in 2016 after struggling with addiction and homelessness. Kelleher’s efforts began simply in 2017 as he took to the streets of Brockton to hand out soup to the homeless. It has since grown to him launching his nonprofit, Support the Soupman, and more recently a for-profit company, Support the Soupman Foods Inc., to sell his soup and launch a coffee line with the proceeds supporting his nonprofit.

“I’m still trying to wrap my head around it,” Kelleher said. “I didn’t ask for any of this. … We can’t do this without the support of the public. It’s a little overwhelming.”

And Kelleher recently presented a jumbo-sized bag of his Brockton Blend coffee to Brockton Mayor Robert Sullivan in front of City Hall.

“What Mr. Kelleher, the Soupman, has been doing for people in Brockton facing homelessness is amazing,” Sullivan said. “It’s making a difference day to day. He has really been engaged in the city here.”

The coffee line has been primarily available online, but is also available for in-person purchase in select stores, such as Prisco’s Market and Deli in Bridgewater. With the opening of Ronnie Waffles, owned by Bridgewater restaurateur Ron Emma, on Wednesday, Kelleher’s coffee is now available for customers to try while out to breakfast.

With the expansion into a coffee line, Kelleher has also been working to broaden his impact in New England. He acquired his first portable shower for the homeless in 2019, but he’s now up to three showers. One will be stationed in Bangor, Maine, he said, while a second, funded by a donation from New England Patriots owner Robert Kraft, will be donated to the nonprofit Disabled American Veterans.

The third shower unit, the first one he bought, which he calls Travis’ Shower, is sticking with him, he said, as he travels around the Brockton area to make free showers accessible for the homeless populations.

Within the next year, he’s hoping to have another three showers, with an ultimate goal of having a shower in every major city in New England.

Outside of his New England purview, Keller and his team have even been getting emails from people and organizations across the country, from as far south as Florida and as west as Las Vegas, seeking advice and guidance on their own missions to help the homeless in their areas.

“The goal is for us to become the experts and then bring it outside of New England, whether that’s through our own entity or partnering with others,” said Nicole Tongue, who handles social media for Support the Soupman.

“I’m a big believer in partnering with organizations,” Kelleher added.

In addition to the showers, his first mobile clothing and food pantry, housed in a converted school bus donated by Lucini Transportation in Bridgewater, has now expanded to a second donated bus with a third bus in the works, Kelleher said.

But even with all the work he’s been doing so far keeping him busy, Kelleher has a few more projects cooking, including upcoming clothing drives and raffles to gather supplies to hand out to the homeless and raise money for his organization. He’s also in the process of working with local churches in Brockton to open a food pantry in the city, with a planned location on Pleasant Street, which will also serve hot meals, he said.

“I couldn’t stop this if I wanted to,” he said. “I don’t want to. This is my life — people helping people, it’s just that simple. It doesn’t take much to put a smile on someone’s face.”