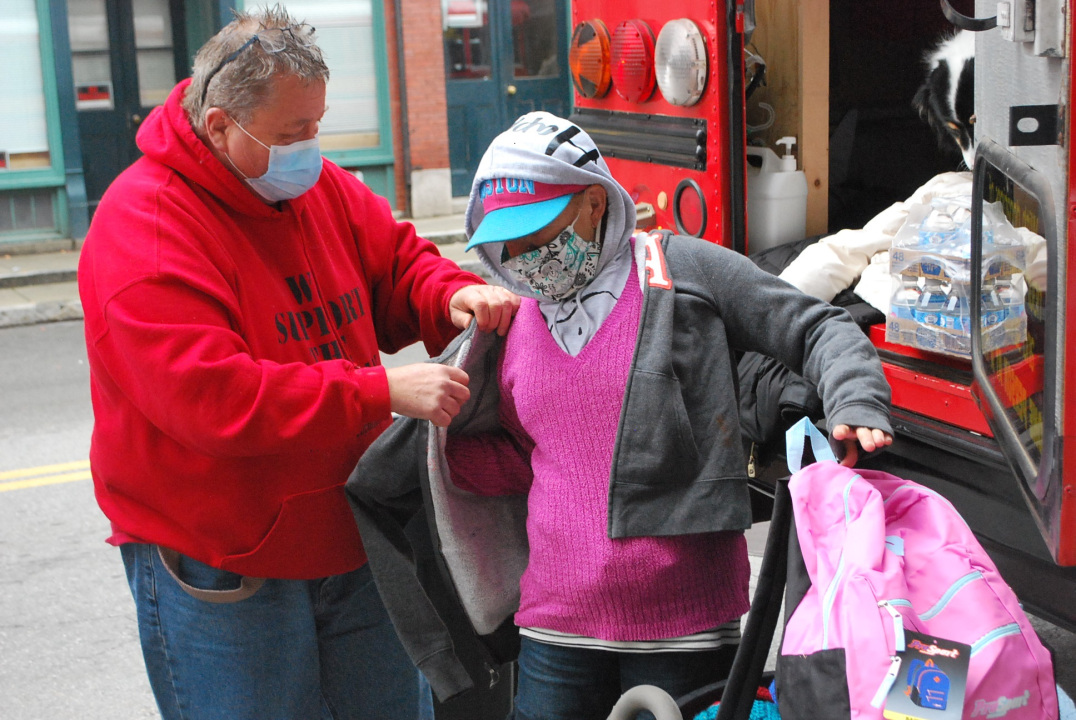 Posted at 20:26h in Uncategorized by soupmanadmin 0 Comments

Dan Phelps has been with The Sun since 1985 and has done everything from covering sports to being the metro editor to being an award-winning columnist to being a copy editor. He is currently in charge of the Schools section; designs the weekly Valley Dispatch newspaper; develops, edits and designs The Weekender section; and edits and designs the daily Lifestyle pages for both The Sun and the Sentinel & Enterprise of Fitchburg, and occasionally writes a column.

At the front of the line stood a garrulous man of 60, talking with each one, as one of his helpers found a coat or maybe a pair of boots in their size. Each homeless person walked away with a coat (if they needed one) and a backpack that included a hat and a gift card to Dunkin’. A box of cookies at the man’s feet was there for the taking, and each person took a package.

The man asked one older woman, who probably didn’t weigh 100 pounds even wearing the new winter coat Peter Kelleher helped her into, how long she has been living on the streets. After she answered him, he shook his head and said, “That’s not acceptable. Not acceptable. I do this because I love you.”

Kelleher — you can call him “Soupman” — travels New England in his big red bus with his two able assistants, Emily and Chris (no last names, please), and trusty dog Koji, stopping in cities with large homeless populations to bring coats, hats, backpacks … and maybe, just maybe, a glimmer of hope.

There is a reason he does this. You know there has to be a reason. No one just gives up a thriving doggy day care business to buy a bus, paint it red and drive around six states giving out Dunkin’ gift cards and winter apparel — some donated, some bought with donations, some just bought.

And you know, also, that the reason is a tragic one.

Kelleher lost a son, Travis, five years ago to addiction and homelessness when Travis was 34. He died homeless in Bangor, Maine.

That’s how his Bridgewater-based nonprofit, Support the Soup Man, started.

While giving out soup on a freezing day, he met a homeless woman who helped him turn his attention to another need.

“This lady walked up to me — she could’ve been my mother — and she didn’t have a hat or gloves. I  gave her mine. Then I went online and said, ‘Hey, I need hats and gloves,’ and here I  am four years later.”

‘NEVER BE THE SAME’

The Soup Man does what he does for one reason: “For me to put a smile on someone’s face, it hits me in the heart. This is my mission. This is my life.”

That it took the death of a child is enough to wipe the smile off his face. Until the next coat is given to the next homeless person.

He did his job in Lowell on Friday. It was an hour and a half before the last person received a coat and backpack — between 100 and 150 by Kelleher’s reckoning. He says he’ll be back over the winter.

Kelleher says when he started on his mission, he was not good at talking to people. Talk to him for 30 seconds and you’ll find that hard to believe.

And it’s a good thing, because if he was still the silent type, people in high places may never have heard him talk. People like Al Roker and Norah O’Donnell, both of whom did national stories on The Soup Man, Roker on “Today,” O’Donnell on the “CBS Evening News.”

Oh, and people like Robert Kraft. As you may know, Kraft has a little bit of money. He gave Kelleher $50,000 after seeing him on TV.

“I spent it in a day,” Kelleher says.

On what? A portable shower, of course.

FROM SOUP TO SOAP

Though he started out with soup, then branched out into winter clothing, Kelleher believes homeless people deserve more. Like being clean.

“Everybody has the right to shower,” he says.

And The Right to Shower happens to be the name of a brand created by Unilever, with which Kelleher has partnered.

So when Kraft gave him $50,000, he bought a portable shower and donated it to the city of Bangor, Maine. The place where his son’s life ended is where Kelleher’s new mission began. One of his buses even includes a portable shower.

“My goal is to have one in every major city in New England,” he says. “They’re needed desperately. Everybody needs to be able to take a shower and put on clean clothes.”

In the meantime, there’s the smaller stuff. But all that soup, all those warm coats and boots, all those gift cards — they cost money. And if there’s one thing The Soup Man doesn’t do, it’s take money when giving out those items. Never has. Never will.

“I don’t want anyone to think I was building a house,” he says, adding, as he pats his bus, “This is a very expensive buggy to run.”

So the operation relies on donations, and not just those of $50,000. Any denomination will do, as well as gently used winter clothing. Go to supportthesoupman.org to find out how to donate.

Kelleher loves what he does. But he hates the reason he does it.

“I lost a son. I’ll never be right again. I wasn’t a real good father. Professionals tell me I  shouldn’t think like that. Easy for them to say. It doesn’t get any easier. He has put me to work. I’m with him every day. I do this with him, and I do this for the homeless population.”

After the last coat and backpack are given out, Soupman, Emily and Chris hit the road back to Bridgewater to restock the bus. Kelleher shakes his head at all the homeless folks he just met. The sheer numbers. The magnitude. And the hope that a little charity can instill.