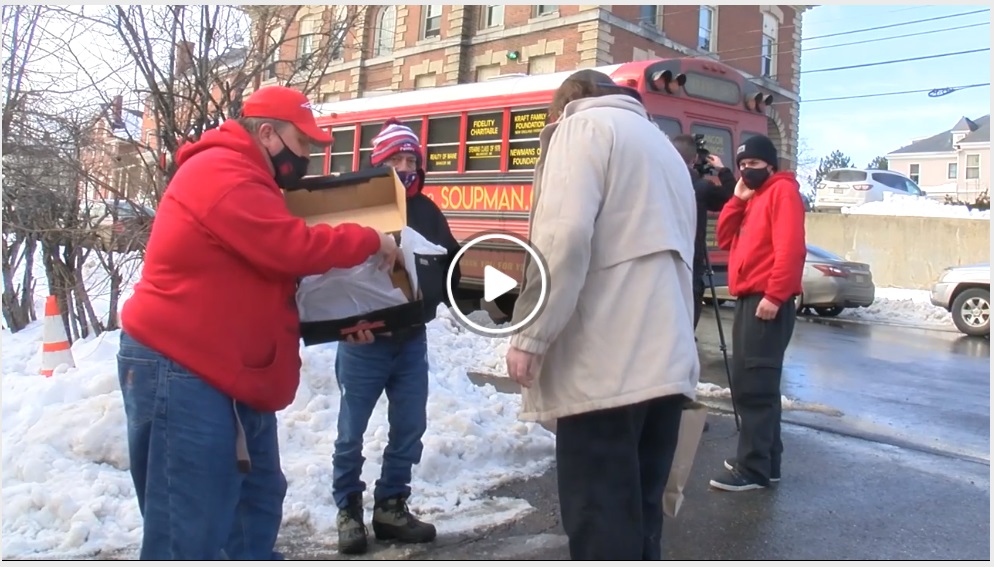 Posted at 17:23h in Featured in News by soupmanadmin 0 Comments

BANGOR – The non-profit organization, Support the Soupman, has made its way back to Bangor to help the homeless.

“I lost a son to the streets of Bangor, Maine about five years ago, and I had to do something,” said Peter Kelleher, founder of Support the Soupman. “I was miserable to bring on awareness.”

After losing his son, Travis, to drug addiction in 2016, Kelleher, also known as the Soupman, began giving back to the homeless population.

“I started making hot soup and bringing it into the homeless,” Kelleher said. “Then, there was a lady that I bumped into that could have been my mother. She didn’t have a hat on or gloves, and she was freezing, so I gave her my hat. I gave her my gloves.”

This inspired him to hit the road to help more people in need.

He said Support the Soupman has grown tremendously since then.

“This is the first time that I brought two buses into Maine. They are both plump full,” Kelleher said. “That one’s getting to be empty, and this one will be empty or mostly empty by the time I get home.”

Kelleher and his team travel throughout New England delivering items, such as warm coats and backpacks to the homeless.

Kim Meszar, a volunteer for Support the Soupman said the reactions from the homeless is unexplainable.

“The happiness that overcomes everybody just to put on a fresh pair of socks is just an overwhelming experience,” Meszar said.

Their passion for this shines through.

“It’s very fulfilling. There’s many people out there who need the help,” Meszar said. “Wherever we can supply that help, we want to be there.”

“To be able to help the homeless or somebody in need is the best feeling in the world,” Kelleher said.

Kelleher said he plans to expand to more cities and add a food truck in the future.

To volunteer or donate, visit supportthesoupman.org.