Bangor’s homeless can now take showers because of a dad who lost his son to an overdose - Support the Soupman
1176
post-template-default,single,single-post,postid-1176,single-format-standard,theme-bridge,bridge-core-2.3.3,woocommerce-demo-store,woocommerce-no-js,ajax_fade,page_not_loaded,,qode-title-hidden,qode_grid_1300,qode-content-sidebar-responsive,columns-4,qode-theme-ver-21.9,qode-theme-bridge,disabled_footer_top,wpb-js-composer js-comp-ver-6.7.0,vc_responsive 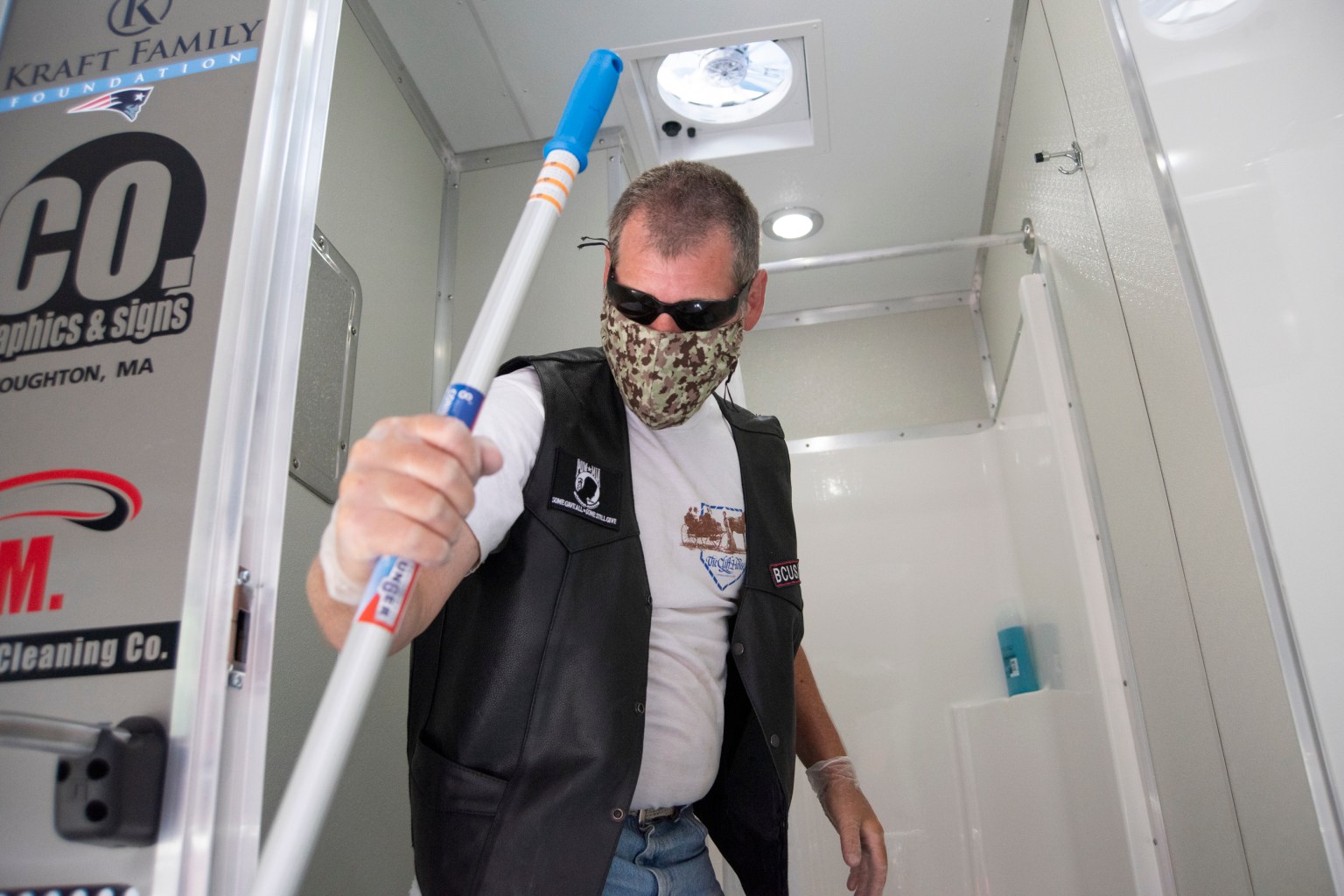 Posted at 12:40h in Featured in News by soupmanadmin 0 Comments

A Millinocket native who has devoted his life to charity after his son died of a drug overdose in Bangor has just completed the donation of a $50,000 portable shower system to an organization that supports people struggling with homelessness in the Queen City.

Peter Kelleher, who now lives in Massachusetts, officially delivered the new outdoor showers earlier this week to the Union Street Brick Church. The propane-powered unit is parked outside the church, with three climate-controlled shower stalls as well as soap, sandals, towels and other resources for those seeking to use them.

The new shower system replaces a temporary one that Kelleher made available to the church earlier this year, according to Laura Cole, general manager of the church’s donation center that offers clothes and other services for those without homes. Kelleher’s organization, Support the Soupman, has also said it will restock the shower supplies as necessary, Cole said.

“For these people to be living out in the woods and living in the same clothes for a week at a time, when they are waiting in line, there is the defeated look that we see all the time,” Cole said. “But when they can get clean underwear, get clean socks, they are a different person. Even if it’s for 20 minutes, they have their dignity. They are clean just like everyone else.”

Kelleher has not lived in Maine for years. But he committed himself to helping people living with homelessness after his son Travis, who lived in Bangor, died of an opioid overdose on Sept. 2, 2016, at the age of 33.

His efforts started with giving out hot soup and other necessities to people in Massachusetts, earning him the nickname “Soupman.” Eventually, he closed a dog day care business so that he could start his organization and started driving around New England in a donated red school bus to hand out supplies.

Last year, he donated more than 1,500 backpacks filled with necessities to people throughout Maine. He also has two other portable shower units that he drives around New England to make available for homeless people, including the one that was in place temporarily in Bangor until this week.

About 50 people used the shower unit that Kelleher left here temporarily last spring, and 11 used the new one the first day it was in operation, according to Cole.

“This is very very emotional for me. I’ve lost a son to the streets of Bangor to drug addiction,” Kelleher said this week. “I’m thrilled.”

To learn more about our services and the ways you may help, please visit our site at SupporttheSoupman.org